A parachute carries us, but who carries the parachute?

The need for smaller wings to achieve faster flight is a popular belief, although efforts to fly faster often result in a considerable loss of performance.

A parachute carries us, but who carries the parachute?

Forces on the wing

Consider a conversation between two pilots;

The argument that a smaller wing is needed to fly faster is a common argument, although the desire to fly fast can often result in a major loss of performance.

If you look a little closer, you may notice that both pilots fly with the same wing. The areas mentioned on the subject they talk about are the projected areas for one, and the flat area for the other. In other words, they fly with the same size and same model wings.

You can experience discussions like this in every flight zone.

In fact, compared to other fixed wing gliders, or light class flying machines such as delta wing, the paraglider has a strong three-dimensional wing.

This oddity stems directly from the specific mechanical structure of our parachutes, very different from conventional wings. In a glider or rigid wing, for example, the resistance of aerodynamic forces is provided by one or more beams, lifting through the span. This boom behaves like a beam embedded in the center of the Wing, and often Bending, the sum of the forces reported in the center of the Wing, or the aerodynamic result is equal to the weight balance of the aircraft (Figure 1). 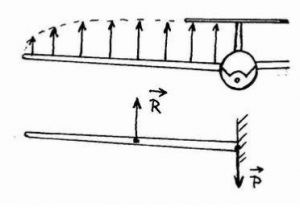 On a paraglider wing, no rigid part is likely to support the efforts of lift in flexion to transfer them to the pilot level. Only a set of lines, do not being able to take back only pure traction forces, is available for the transfer of forces. The breakdown of local lift elements at each line point is shown in figure 2, first approximating the paraglider to a simple surface, and assuming that the local lift is always positive. 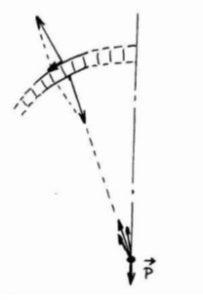 From a general point of view, several situations may arise (Figure 3):